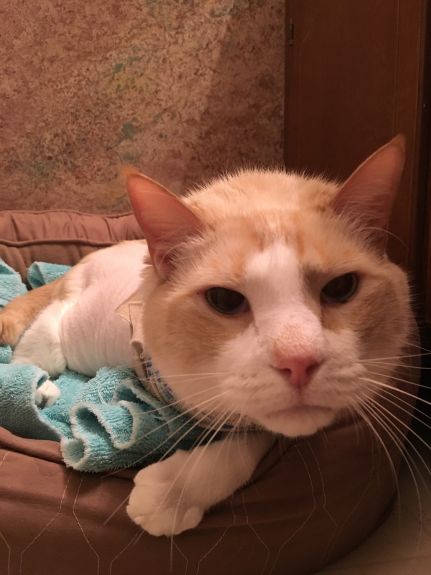 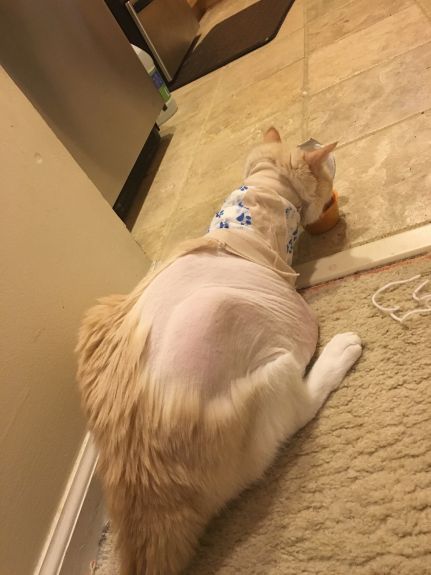 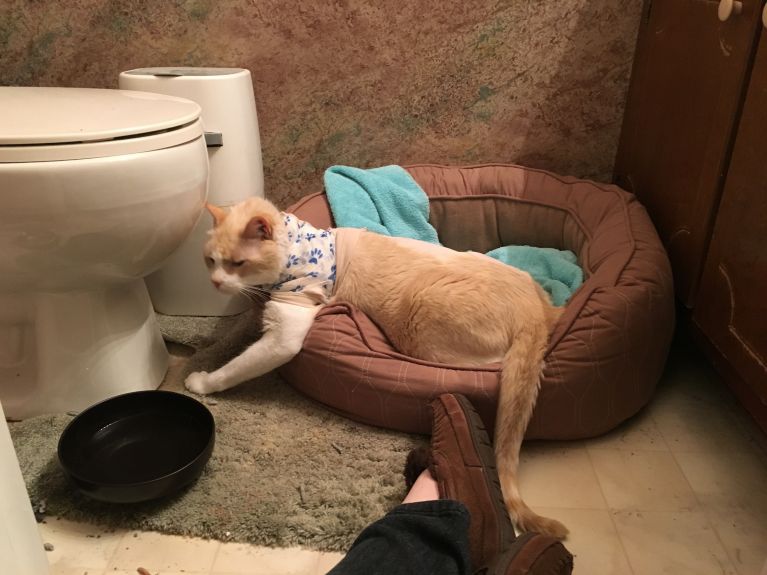 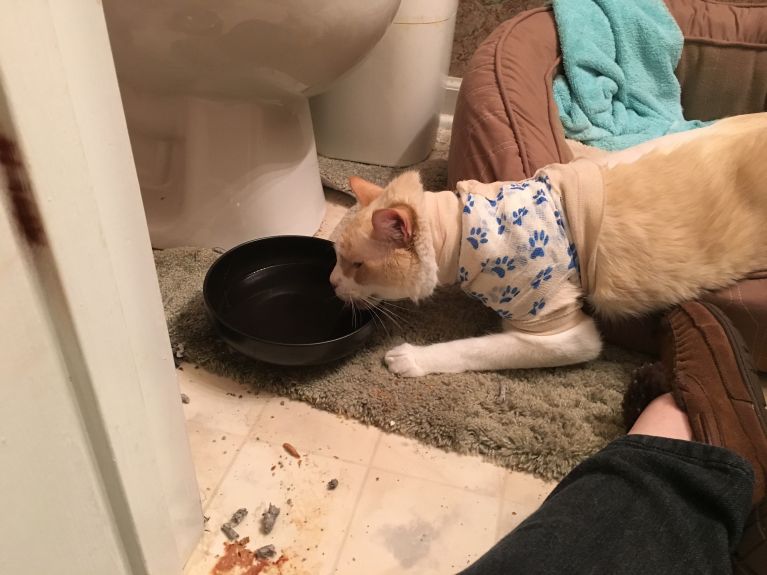 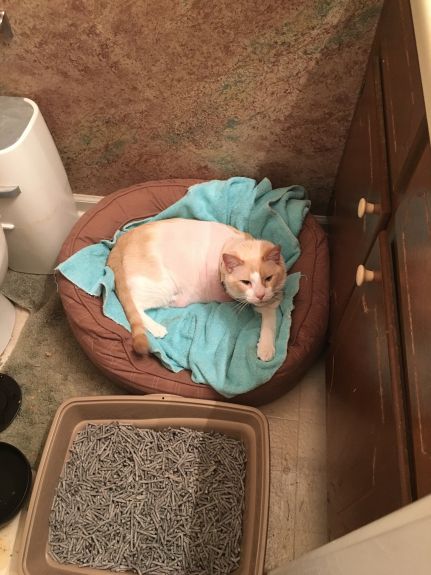 So I went in on Saturday morning to give Charlie his breakfast and saw that he had managed to work off the second e-collar overnight. Fortunately, the vet wrapped him so snug and secure that he can’t bend his neck or torso enough to reach his incision area, and he’s actually a lot quieter now that the cone is off – he kept flailing around trying to get it off. So I’m letting him keep it off as long as he isn’t bothering his stitches.

You can see how tiny he looks in the front with his leg gone. I suppose this is what the vet meant by it being a “less cosmetic” amputation. He’s also bald along that whole side because the vet wasn’t sure if she would need to do skin grafts. Fortunately she was able to tug his loose belly skin forward enough to close the incision without it being under too much tension. So I guess he got a tummy tuck as well! 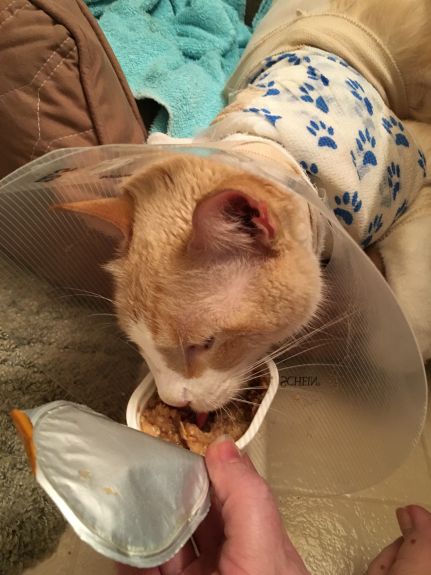 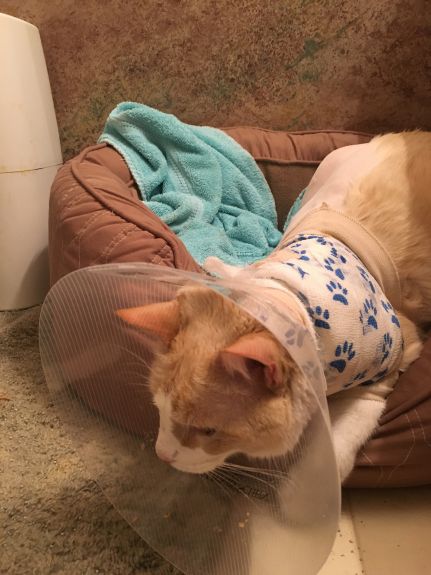 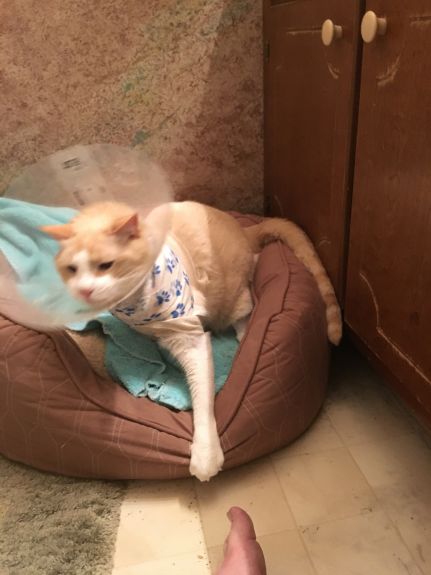 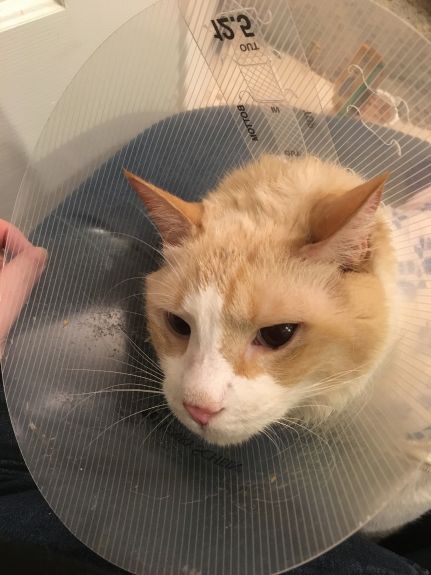 It turned out that Charlie had popped a few of his sutures and some others were starting to work loose, so they had to sedate him, redo the whole line with staples instead, then wrap him up even more than before and add a new, extra-large e-collar to discourage him from messing with it. He was at the vet all day Friday and got another 24-hour pain shot. This cone was so big that I had to hold his food and water for him. He also REALLY hated it. The blurry pic above is him trying to shake it off.

The other conclusion is that Charlie needs to stay confined until he’s more healed, because he kept trying to jump up on furniture and such (even when I tried to make him some steps!) He needs to stay still and NOT MOVE AROUND so his incision can heal. So Charlie is sentenced to bathroom jail until further notice. 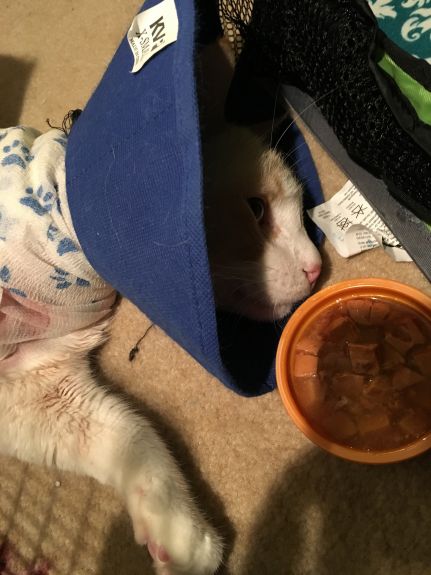 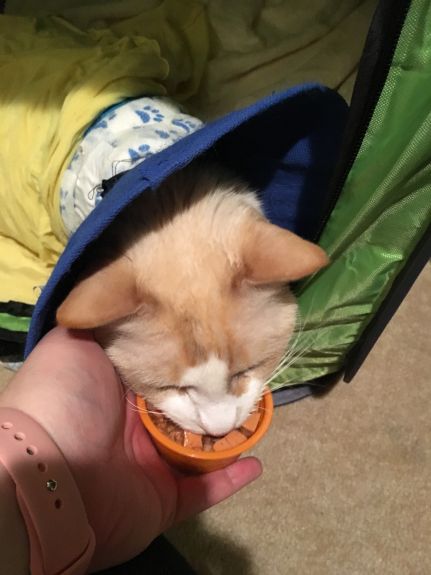 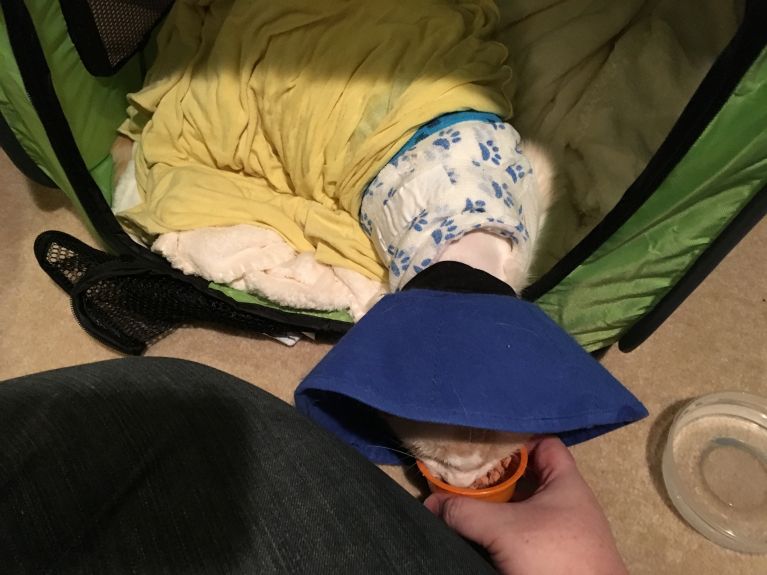 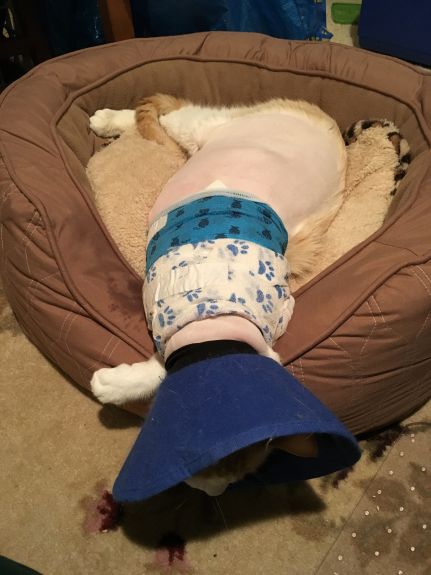 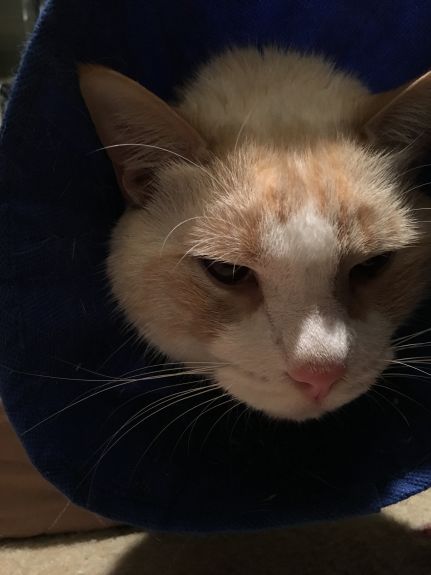 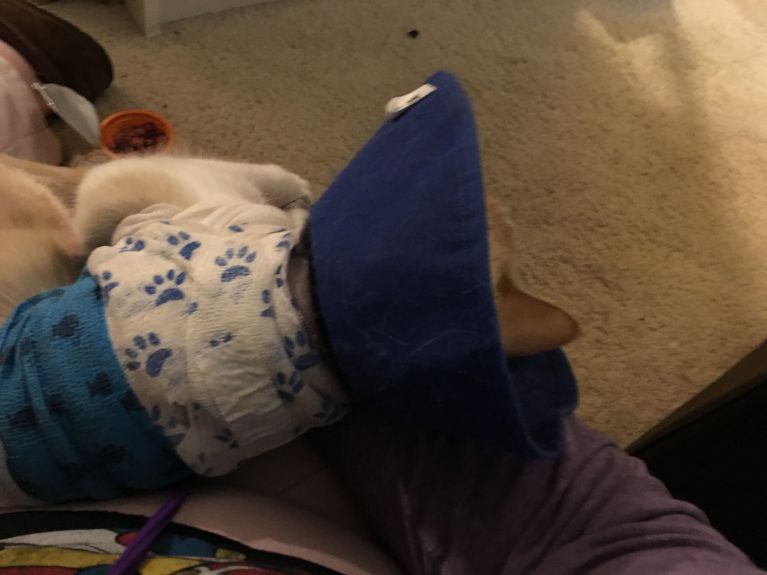 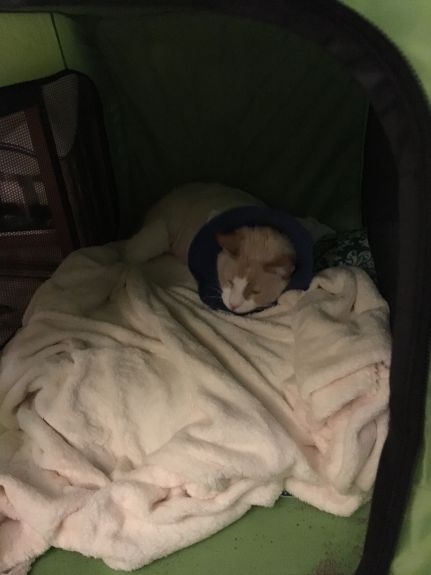 I went to pick Charlie up late on Wednesday afternoon. He yowled piteously the whole way home; it was heartbreaking. He was obviously groggy and unhappy. He’d had a 24-hour opiate pain injection right before he left the vet; I was given a bunch of buprenex syringes to start the next day. The instructions were to rub it on his gums; he wasn’t supposed to swallow it but to absorb it through his mouth.

Charlie ate some dinner, though I had to hold it up for him, and then was mostly interested in sleeping. His wound was still seeping a little, so I was supposed to take him back to the vet on Friday and Monday to have it looked at. He mostly wanted to curl up in his little den, but several times tried to clamber up in my lap. I didn’t know whether it would be better or worse to try to help him!

On Wednesday night and Thursday, we shut Charlie in the small half bath while we were sleeping and let him out while we were awake. Unfortunately, as he got more awake, he started wanting to do more, and also started trying to work off his e-collar. I turned it around so that it faced down toward his body rather than up around his face, which seemed to settle him a bit.

Friday morning, I could tell that he had been bleeding a little, so I took him in to the vet early.

I dropped Charlie off early Tuesday morning, then went to have surgery of my own–a root canal. All in all, not a fun day. The vet called in the afternoon to let me know that Charlie had come through his surgery fine and was awake, though she had him on the good drugs and he would be pretty groggy for the next few days. They wanted to keep him overnight, which I knew was a probability.

She was “80% pleased” with how the surgery had gone. Her one exception was that part of the tumor had grown too close to Charlie’s jugular vein to be able to get as wide a margin as she wanted (she tries for 5cm.) She wanted to send the entire amputated limb to the pathology lab so they could see whether they got all the cancer. I agreed. Due to the Thanksgiving holiday, I should expect the results to be somewhat delayed, though.

I comforted myself by buying Charlie two new beds and a new fuzzy blanket and a pop-up dog kennel to make a little den for him under the table where he likes to hide from the vacuum cleaner. At least that way I felt like I was doing something.